Every time I return from a book fair I’m asked by family, friends, and colleagues, “Was it a good fair?” I’m never entirely certain how to answer that question. A “good” book fair is good because of many different elements working in conjunction with each other. A fair can be good based on the sales made; certainly we all want to make a profit for our time and effort and our investment in renting a booth. A fair can also be good based on new contacts established; you never know when getting to know someone’s interests might lead to a future sale. A fair can also be good based on the purchases one makes; several times at book fairs, I have found items in other dealer’s booths that gave me that fingerspitzengefuhl feeling, bought them and then sold them at a profit. Finally, a good book fair also includes a bit of camaraderie. I have to think I will make a profit in order to sign up for a book fair, but even if I don’t, any of the criteria mentioned above can make the fair a good one.

This past weekend was my second time selling books at the Gold Rush Book Fair in Grass Valley. It was my sixth book fair and it was the first time I decided to rent my own booth space rather than sharing it with another seller. I think I have done enough fairs at this point to judge whether or not it was a good fair.

By most criteria, it was indeed a good fair, though it was not without its moments where I wondered if it would be otherwise. To begin with, the air conditioner in the Bookmobile stopped working. This meant driving around 100 degree (Fahrenheit) Grass Valley with no air conditioning and a three hour ride home through triple digit temperatures yesterday. Added to the hot weather was a lack of confidence that I think was precipitated by the fact that I have not sold my own books at a fair since September, 2008. The US economy has changed a great deal in the past six months, and I wondered whether any collectors or other dealers would have money to spend on books and on traveling to a book fair that is held in a destination town a bit off the beaten trail. Lastly, I did ok at this fair last year, breaking even on my expenses, but I really hoped to do better this year. I wondered whether that was possible or whether I might actually lose money on this fair.

Note to those of you who plan to be booksellers: None of this wondering and worrying is helpful, so you will do best to just ignore it and go to the fair. You’ll sell more books than if you had stayed home.

Though it is a small regional fair (just 41 dealers this year), the Gold Rush Book Fair is one of my favorites. It’s held in a picturesque historic town. It’s the only fair I’ve done that has a special dinner for all of the booksellers, and because of this, it creates a special camaraderie among the booksellers and is just a lot of fun. After meeting for cocktails and happy hour at the lovely Toad Hall Bookshop,

we booksellers were herded up the stairs into a Masonic Hall where Grass Valley’s Chief of Police, his wife, and many other good cooks, prepared a delicious spaghetti dinner for all of the booksellers and our guests, about 75 people. Peter Siegel of Bea and Peter Siegel Books was the Honored Guest Bookseller of the 2009 Fair, and I loved hearing his story of how his mother got started in the business when he was just a boy. (Being a mother of boys myself, I especially liked hearing Peter’s impressions of books and book hunting from his childhood.) Peter also shared the story of how he came to be a partner in the business and his opinions on the future of antiquarian bookselling. 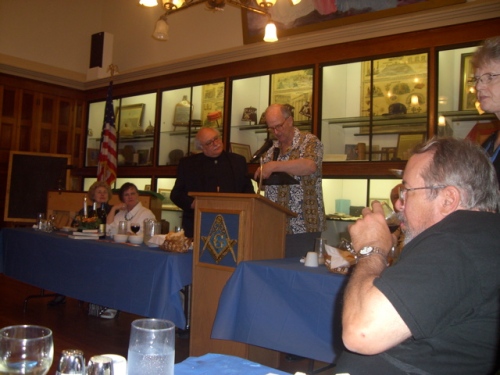 The dinner was served at long, family-style tables, so I found myself getting to know some of my fellow booksellers (Stephanie Howlett West, Dan Glaeser, and Chris Volk and Shep Iams,) a little bit better. It was a fun evening and a good way to kick off the fair. Even though I have been known to be a bit shy in social situations, I wish more book fairs had such gatherings. They’re good for morale and can be good for sales.

The fair got off to a brisk start at 10:00 a.m., and I had my first sale (and the best of the day) to another dealer a little before the fair opened to the public. Things were busy until about 2:00 p.m, and then seemed to slow down a bit until the fair’s 5:00 closing time. By this time, I had had several sales and had made a modest profit, an improvement over last year. I sold more books to “civilians” than I did to booksellers, but the amount of the sales made to the booksellers was larger. I came away with at least two new customers who I heard from via email today, so there may be some follow-up sales this week or at a later date.

All in all it was a good book fair. Though I have made more profit at larger book fairs in major metropolitan areas, a booth at the Gold Rush Book Fair is relatively inexpensive when compared to the larger fairs. It’s easier to make a profit at this smaller fair with its (for me anyway) smaller expenses.

All that glitters is not just gold at the Gold Rush Book Fair. In addition to the “gold” or potential profit a seller can make by participating in this fair, there are other intangible benefits to doing the fair. I think my post from last year sums it up best:

“The value of book fairs can not be judged by sales alone. Their worth can also be found in purchasing opportunities, in networking with colleagues, and in developing customer relationships. I love book fairs, and I loved the fair this weekend enough to come back next year.”

Here’s a photo of my booth. Close-ups to come tomorrow.

I’ll leave you with this final quote about the Gold Rush (and Gold Rush towns like Grass Valley) from historian H.W. Brands:

“California presented to people a new model for the American dream—one where the emphasis was on the ability to take risks, the willingness to gamble on the future.”

I’d say this statement about California applies to book fairs as well. Booksellers take a risk when we sign up and pay for a booth space at a book fair, sometimes with mixed results. But our participation in book fairs signifies our willingness to gamble on the future of books and bookselling. Short of an open shop, a book fair is one of the best ways to bring books to the public. I’m all in.